AirBnb apologized last Wednesday for ads that they put up in San Francisco that were determined by the public to be “tone-deaf” on Twitter.

The apartment-sharing company was attempting to highlight the fact that their hotel taxes increased revenue for the city, and wanted to give suggestions as to what the city should do with the money: 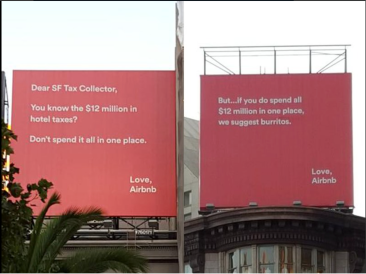 However, the billboards did not sit well with many city residents, who took to social media to express their outrage:

“The intent was to show the hotel tax contribution from our hosts and guests, which is roughly $1 million per month,” Christopher Nulty, the company’s spokesman, said in a statement. “It was the wrong tone and we apologize to anyone who was offended. These ads are being taken down immediately.”

Allen Adamson, a brand expert, said in a statement to the New York Times that the attitude of Airbnb in the ads is not unlike a lot of startup companies in the market today, because they want to appeal to younger consumers by highlighting key political issues.

The billboards went up around the city at a key time for the company. On November 3rd, the city will vote on a ballot that could really limit the freedom Airbnb has had in its home city. According to VICE News,

“The proposal would cap rentals to travelers at 75 days a year, and trigger steep civil fines and costly lawsuits against the company in the case of violations. The measure also requires hosts and the company to share data with the city about the number of hosts operating and their revenues – something regular landlords are already required to do.”

Many other startup companies have similar ad strategies to Airbnb, because they need to stand out among more established businesses, this one just fell a little short of the mark.