The Roy H. Park School of Communications at Ithaca College is hosting “Women in Media Month.” Read about one of the many events occurring this month told by the PRSSA Blog Team.

“Trust your dreams, keep true to yourself, and tell your story the way you want to tell it.”- Cindi Berger ’83, Chairman and CEO, PMK*BNC.

This was just one quote among many pieces of advice shared at the IC Women in Media Panel last week in the Park School on International Women’s Day. To be honest, there were simply too many sound bites to choose from. Every line spoken was women empowerment gold.

The panel consisted of four successful women working in the media industry:

As a communications student with a passion for public relations, I could barely contain my excitement when I learned the CEO of a top entertainment PR agency was going to be the keynoter.

Berger shared her story of how she entered the industry as a young, eager receptionist who walked her resume into three agencies in New York before PMK*BNC offered her the open position. Through dedication and a knack for publicity, she worked her way up to Chairman and CEO of the same agency she was clipping newspapers for decades earlier. After listening to Berger’s story, I know I was not the only member in that audience who felt immediate inspiration to get out into the world and begin his or her own career in public relations.

The most prominent message I received from her speech was that you have to hustle your way through the business in order for success to result. I reached this conclusion after her entertaining anecdote about her experience planning a professional luncheon between Rosie O’Donnell and Oprah. Yes, you did read that correctly–our own IC alumna Cindi Berger had a role in the partnership of two of the largest names in television.

In order to have the opportunity to even be in the same room as two members of television royalty, Berger had to work hard. She knew early on in her life that she was meant for a career in entertainment publicity, and she did not take no for an answer to make it there. Berger heard skepticism along the way, but she did not let that stop her. That is not how you make it as a woman in PR.

If her story proved one thing to us it was that you have to put your best foot forward and not leave anything to chance. Berger advised us to “do as much as you can rather than doing as little as you can get away with.” She did not leave one logistical detail of that luncheon between Rosie and Oprah to chance, and her attention to detail made for a successful event.

This is the epitome of hustling through the 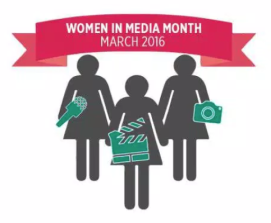 The latter message is one that TVR professor Chrissy Guest stressed in her remarks. She has firsthand witnessed the difficulties women face in the male-dominated media industry. The only way for women to continue achieving success is to help each other along the way. When it comes to having a voice at the table, Anna Deshawn Rainey ’08 added that you must look for ways to include every single voice in the discussions. You must know your own perspective and the value you have to offer when you’re the only woman in the professional space. I couldn’t help but connect this back to how women have to remain authentic when sharing their voice because it is the only way it will be their true story that is represented at the table.

Berger added to the discussion how women especially want to help the next generation, even in an industry that is highly competitive. Professor Guest piggybacked off of the statement by explaining that in a competitive industry women have to help each other in order to change industry actions, not just change the conversation and the rhetoric surrounding females in the media industry.

“Inject your own talents into the work you do.”—Allison Usavage ‘11

In response to workplace sexism we were advised:

The primary lesson I learned from these four speakers is that you have to hustle. You don’t graduate college and become a CEO. You hustle to get there. You experience life; you learn lessons from mentors in the preceding generations, you learn from your mistakes, cultivate relationships, and you hustle your way through the industry.

Never forget though, that as women we must help one another because in order to make it in the industry you do have to be a good person. This is how we will make an impact as women in media.