Read about the gender wage discrepancy among national soccer players told by the PRSSA Blog team.

Over the past few decades, the war on wages between working men and women has sufficiently grown. Women around the world are finally taking a stand to defend their rights to equal salaries to their male counterparts. In recent events, the ever so popular U.S. Women’s Soccer Team came out in the media to make a statement claim
ing they “have been paid and continue to be paid substantially less than (men’s national team) players.” One of the issues at hand is that the women’s team is much more popular and has more championship titles than their male counterparts. So this makes everyone ask, why are the men still being paid more?

Below are some numbers to give people an idea of the inconsistency of the U.S. Soccer Federation’s distribution of money. This past year the women’s team brought in $26.8 million in revenue including $3.2 million in World Cup revenue. The men’s team brought in a total of $21 million, which is $5.8 million less than the women’s team. The federation also predicts that the women will bring in about $17.6 million this coming year while the men are predicted to bring in only half of that, at about $9 million. While the numbers truly show how much more the women are bringing in, it’s the salaries behind the scenes where the real scandal lies.  Here are a few examples of the inequality in salaries:

Although these numbers will vary based on players and performance, the overall discrepancy between the two team’s salaries says it all. 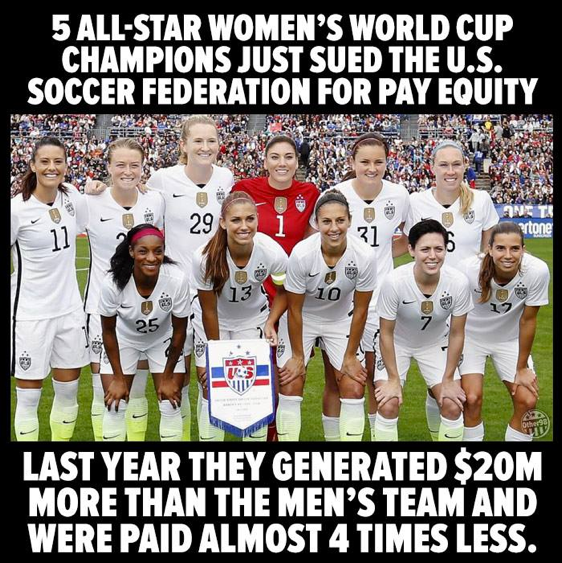 Though this specifically is an issue within the U.S. Soccer Federation, it’s also one found in many modern day work scenarios. In many businesses these days, it’s common to find not only male employees higher up in the business ladder but also males that are paid a salary much higher than their female counterparts. Being 2016, it’s time that female employees are finally given an equal pay. The U.S. Women’s Soccer team is one of the first groups to really step out and combat the Equal Employment Opportunity Commission, but it will only be time before more progressive women make a stand as well.