Read about the role feminism plays in the reputations of celebrities like Emma Watson and how she uses her celebrity brand to advocate for the issue, as told by the PRSSA blog team.

Recently, Emma Watson was featured in Vanity Fair. The feature outlines her life and how she became who she is today: a feminist, UN Ambassador, activist, actress and so much more. Throughout the article, Watson discusses the small but important changes she made in her recent film, Beauty & The Beast, like the switch from Belle’s ballet shoes to riding boots and her love for literature. Watson focuses on creating an empowering figure out of Belle. Watson further explains her struggle with the intense limelight she is and has received due to the Harry Potter films and how she deals with it. The overall article was an excellently written piece with some personal insight on Watson’s caring and confident personality and further supporting feminism. However, some people weren’t so supportive.

Throughout the article there are various photos of Watson (pictured below). Of the eleven or so photos and two videos, the single photo wherein Watson is wearing a vest type top and showing some cleavage was the element people focused on, and many attacked. People called her a hypocrite, one person even saying in a tweet “Emma Watson: ‘Feminism, feminism… gender wage gap… why oh why am I not taken seriously… feminism… oh, and here are my t-ts!”.

Now, why is it that Emma Watson showing some cleavage means she isn’t a feminist? Why is that expressing her womanly features isn’t considered feminism? This implies that being a feminist means women need to cover up and hide their femininity. Feminism is saying women are equal to men, not saying in order for women to be equal to men they must act like men. Just because women and men are different does not mean we should be treated differently. That is feminism. 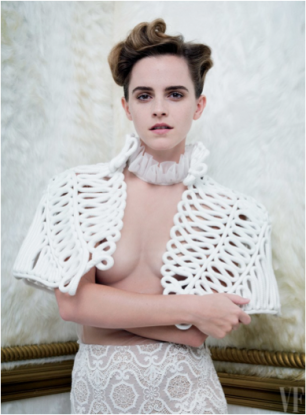 “It just always reveals to me how many misconceptions and what a misunderstanding there is about what feminism is,’ she said. ‘Feminism is about giving women choice. Feminism is not a stick with which to beat other women with. It’s about freedom, it’s about liberation, it’s about equality. I really don’t know what my t—s have to do with it”.

This Vanity Fair photoshoot supported the cause of feminism. It highlighted that feminists can be and act however they want. They can be elegant, daring, quiet, loud. They can be girls and boys. Emma Watson is a great representative of feminism and the reaction from this photoshoot further demonstrated why feminism is needed. 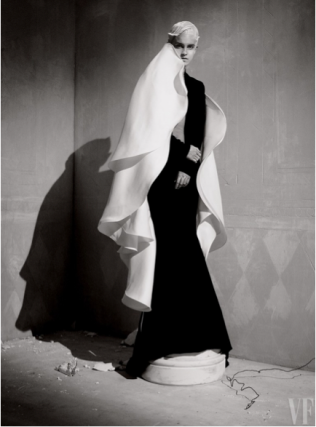