Read about how to learn from celebrity mistakes and the importance of staying professional on social media.

Social media sites have become increasingly popular in recent years and play a large role in the public relations industry. Sites such as Twitter, Instagram, and Snapchat allow its users to stay connected and share important events and news. In addition, many celebrities use their accounts as a way to appear more personable and relatable, as well as keep in touch with their fans. While most celebrity social media accounts are run by publicists or managers, some celebrities such as Kim Kardashian or even Donald Trump take pride in managing their own accounts and controlling their posts. As a result, there are many instances in which celebrities have been called out for inappropriate or offensive posts, or they have given their fans a front-row seat to some of the greatest celebrity drama to ever occur. Here are a few tips for practicing professional etiquette on your social media accounts- since you never know who is going to see it.

1. Don’t use social media to fight your battles.

Plenty of celebrities use their large amount of social media followers to sway or manipulate how they are viewed by the public. For example, Kanye West and Taylor Swift have had a rocky relationship ever since the time that he interrupted her VMA acceptance speech for “Video of the Year” by arguing to a live audience that Beyoncé was the clear winner. The conflict came to a boiling point last summer when Swift used her platform at the Grammy awards to call out Kanye for taking credit for her success. Kanye’s wife Kim Kardashian came to his defense by posting a series of videos on her Snapchat that exposed Taylor for lying to the press about her involvement in Kanye’s latest hit. The incident was then taken to Twitter when Kardashian posted a Tweet that was speculated to be about Swift, and the rest is history. Taylor’s reputation took a big hit as a result of the conflict, and Kim was accused of being overly petty.

2. Don’t use social media as an emotional outlet.

Take a page from Selena Gomez and Justin Bieber, who after having a very messy and public breakup, continued to bicker with each other via Instagram. Bieber posted a photo with his new girlfriend, which disappointed many of his fans, and he wasted no time fighting back with them. Gomez used the conflict as an opportunity to point out Bieber’s faults and explain the demise of their relationship, forcing fans to choose a side. Gomez has since revealed that she was embarrassed of her reaction and shouldn’t have gotten involved.

Another example featuring Taylor Swift! Around the time of her feud with Kim and Kanye, Taylor and Calvin Harris had recently broken up, and it was revealed that she was one of the cowriters of his recent single “This is What You Came for.” Harris posted a series of (now deleted) Tweets which questioned Swift’s character and revealed his stance on his ex-girlfriend’s role in the media. He later expressed remorse for the Tweets and admitted that it was an immature and impulsive way to handle the situation. 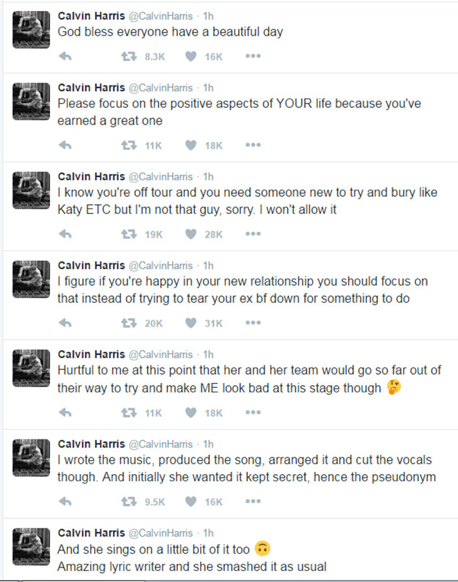 Social media can be very useful in allowing someone to build their personal brand and begin gaining publicity for their achievements. However, if used incorrectly, it can be damaging to the user and possibly haunt them in both their professional and personal careers. These celebrities learned the hard way that it can be very bad for their image to use social media in a nonprofessional way, even though it may be entertaining for their fans. Don’t do the same on your account!