When most people picture a scientist from NASA, their mental image is likely a man in a white coat with wire framed glasses and clean cute hair — not a former heavy metal rocker with a mohawk.

Boback Ferdowsi gained his popularity back in 2012 during the Curiousity landing when during the live broadcast of the event he sported a stars and stripes mohawk. In the next 24 hours, Ferdowsi and his mohawk because national news on social media, even gaining recognition from President Obama.

This past week, NASA made the announcement of the possibility of water on Mars, and the discovery was made by another man like Ferdowsi that is changing the public’s perception of who can participate in professions at NASA. 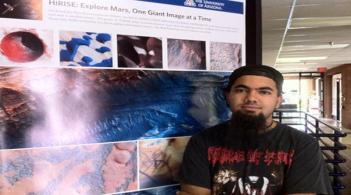 Lujendra Ojha and his proposal

Lujendra Ojha is a former heavy metal guitarist, and a postgraduate student at Georgia Institute of Technology, where he studies Planetary Science. People like Ojha are a blessing in disguise for NASA’s PR team, because they encourage people of all backgrounds to pursue a dream in the field.

The organization needs all the publicity they can get when government opposition is increasing and funding is shrinking. President Obama asked Congress to approve a budget of $18.4 billion, which is equivalent to only .5% of the country’s national spending, as opposed to the 4.5% in the 1960s.

According to The Guardian, Casey Dreier, director of advocacy at the Planetary Society noted that NASA has realized that they won’t be getting the kind of budget they had in the ‘60s to fund the proposed 2030 Mars exploration project.

“It’s not like the 60s when the President shows up and says what he wants NASA to do and doubles the budget two years in a row,” Dreier said. “We have to realise there’s no Kennedy moment coming up.”