Read about GrubHub’s latest controversy regarding the recent elections, as told by the IC PRSSA Blog!

With any election or contest, there are winners and there are losers. But when Donald Trump was elected the 45th President of the United States last week, the divisiveness and passion could be felt immediately across the nation.

Politics and business are not to be mixed. But this past week, the online/mobile food ordering company, GrubHub found itself in hot water over CEO Matt Maloney’s companywide email that posed the question to employees whether they had voted for Donald Trump or not, and if so, that they should resign. “If you do not agree with this statement then please reply to this email with your resignation because you have no place here,” read the CEO’s email.

The company, established in 2004 and offers over 45,000 takeout options in over 1,100 U.S. cities as well as London has taken major flack and negative press for the actions of its leader. The hashtag #boycottgrubhub spread on twitter as conservatives pushed a boycott, company shares fell 9% Thursday & Friday, and many even called for Maloney to be fired. 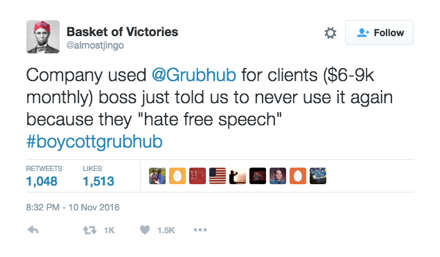 The CEO’s response was the tipping point for many. Maloney responded a day later saying that others had misconstrued his message that was supposed to be focused on “inclusion and tolerance in the workplace.” He also stated that “I want to clarify that I did not ask for anyone to resign if they voted for Trump… I would never make such a demand.” 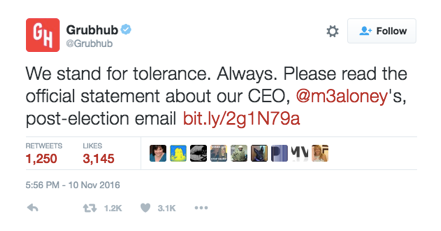 But, the damage was done. News outlets from Fox News to Forbes covered the “attack”. Crisis management expert Larry Kamer of Kamer Consulting Group stated that, “You’ve got to think twice before you say something that could alienate a chunk of 60 million people when you are [running] a consumer brand that basically wants everybody’s business,” he says. “They want Trump supporters; they want Clinton supporters.”

All eyes will be on GrubHub over the next few weeks and months to see how the company rebounds from this major PR blunder. Seattle-based Outsidethinc Creative Arts Agency’s Krista Norsworthy says what is required of Grubhub is “short and simple: a video campaign that takes direct responsibility for the mistake.” The solution may be just that, short and simple, but the road to that is definitely not.